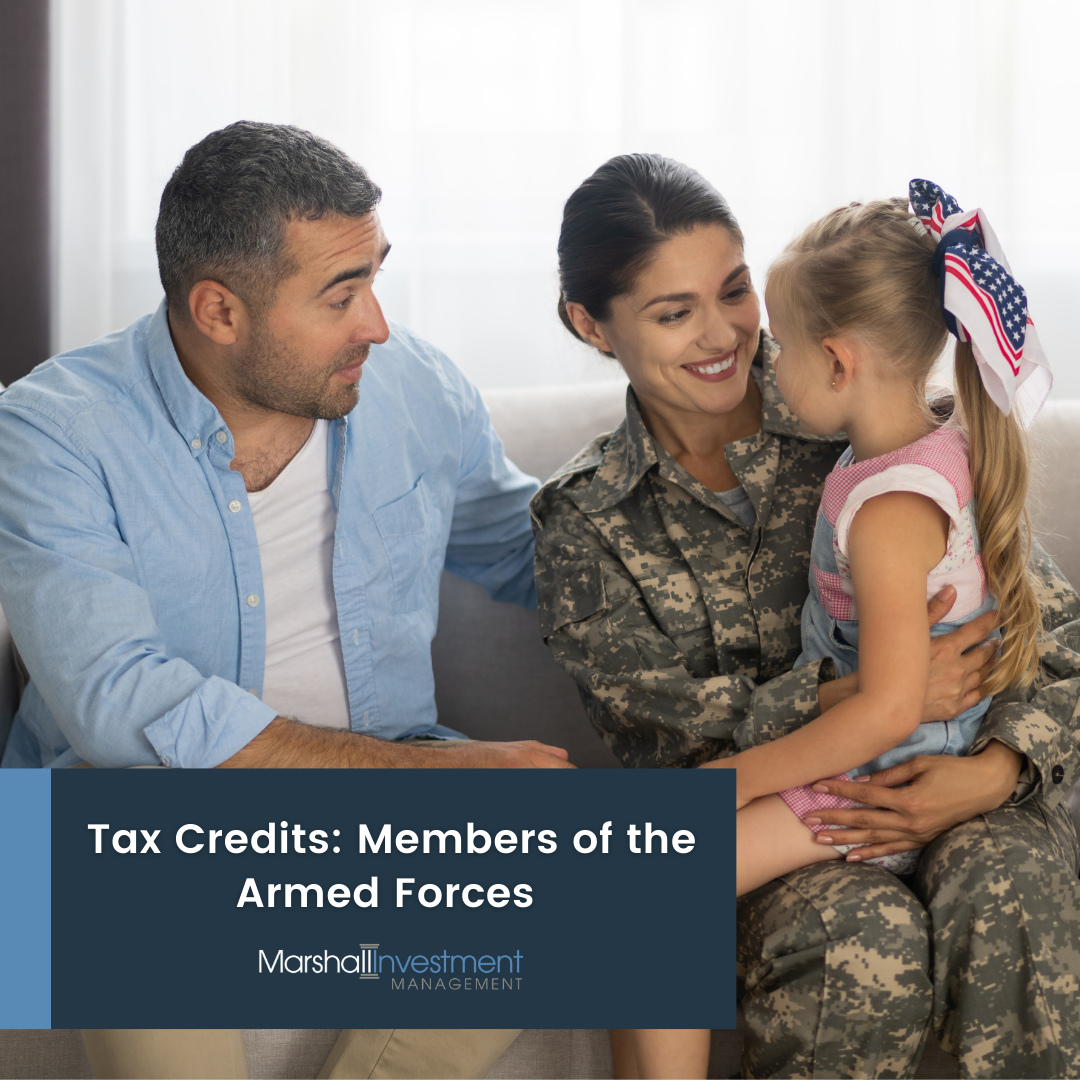 The federal government provides tax relief to qualifying individuals in the form of tax credits. Tax credits are valuable because they are dollar-for-dollar reductions of your tax liability. In some cases, they may result in tax refunds. In general, the rules regarding tax credits are the same for members of the Armed Forces as they are for everyone else. Nevertheless, certain tax credits may be of particular interest to members of the military. The following discussion explains eligibility requirements of the earned income credit (EIC), the child tax credit, and the child and dependent care credit (CDCC) (there are other available tax credits not discussed here). Also discussed are some eligibility factors as they specifically pertain to service members.

Several factors determine your eligibility for the EIC. Generally, you (and your spouse, if applicable) must:

In addition to the above requirements, you must meet other requirements. The specific requirements that apply depend on whether or not you have a qualifying child.

If you have a child (or children) and wish to claim the EIC as a taxpayer with a qualifying child, your child must have a valid Social Security number and meet all three of the following requirements:

Caution: If you file for the EIC as a taxpayer with a qualifying child, you must complete Schedule EIC and attach it to your tax return.

Tip: U.S. military personnel stationed outside the U.S. on extended active duty are considered to live in the U.S. during that duty period for purposes of the EIC. (Extended active duty means that you are called or ordered to duty for an indefinite period or for a period of more than 90 days.)

If you don't have a child who qualifies under the EIC criteria, you may still be eligible for the EIC. In addition to the general EIC eligibility requirements listed above, you (or your spouse if filing a joint return) must:

Tip: Individuals in the Armed Forces who are stationed outside the United States on extended active duty are considered to be living in the United States. If you're temporarily absent from your home solely on account of military service, you may still be eligible for the EIC if you plan to return to your main home at the end of your assignment.

Starting in 2021, taxpayers otherwise eligible for the credit except that their children do not have Social Security numbers can claim the credit for individuals with no qualifying children.

Finally, to be eligible for the EIC, you must fall within certain income guidelines. To qualify for the full amount of the EIC, your earned income and AGI must each be less than:

If your earned income or AGI is above these limits, your EIC eligibility begins to phase out, and is eliminated completely when either amount reaches:

Figure the credit with and without your nontaxable combat pay before making the election. Whether the election increases or decreases your EIC depends on your total earned income, filing status, and number of qualifying children.

If you have a child (or children), you may qualify for the child tax credit. If the credit exceeds your tax liability, you might be able to receive a refund for all or a part of the difference (see below for more on this). Like the EIC (see above), how much you get depends on your level of income and how many children you have. In 2022, the maximum credit is $2,000 for each qualifying child. For 2021 only, the child tax credit amount was $3,000 per qualifying child ($3,600 per qualifying child under age 6).

To qualify for the child tax credit, your child must meet all of the following tests:

The child tax credit is limited if your modified adjusted gross income (MAGI) is above a certain amount. (Your MAGI is your AGI plus income ordinarily not included in your AGI, such as foreign earned income and tax-exempt interest income.) The credit begins to phase out if your MAGI exceeds:

Special rules started phasing out the increased portion of the child tax credit in 2021 at much lower thresholds than under pre-existing rules. The credit, as reduced under the special rules for 2021, was then subject to phaseout under the pre-existing phaseout rules. The following table summarizes the effect of the phaseouts on the child tax credit in 2021 only, based on MAGI.

The child and dependent care credit (CDCC) helps parents pay for child care so they can work. The CDCC is a nonrefundable credit for up to 35 percent (50 percent for 2021 only) of certain expenses you paid to provide care for a qualifying person. The qualifying person may be either a child under age 13 whom you claim as a dependent, or a spouse who is physically or mentally incapable of self-care. An individual of any age who is physically or mentally incapable of self-care and whom you can claim as a dependent would also be a qualifying person.

To qualify to take the credit, you must meet all of the following eligibility criteria:

Caution: The credit applies only to expenses that you paid. Dependent care assistance including child care provided by the Department of Defense to members of the military is not included in gross income. This means that you can only take this credit to cover expenses you paid to the extent that it exceeds any allowance you receive.

For more information on this tax credit, see IRS Publication 503.

Maintaining and living in a home requirement

Generally, you're maintaining a home if you pay for more than half the annual cost of running the home with your own funds. The cost of running the home normally includes expenses such as paying property taxes and mortgage interest. As a member of the Armed Forces, you may receive a housing allowance — the BAH — and you may use these funds to pay those expenses. For the purpose of determining your eligibility for the CDCC, these funds are considered your own funds. When determining if you're paying more than half the annual costs of running your home, you need not reduce those costs by the BAH you receive.

Earned income by both spouses requirement

It's important to note that, if you're married, both spouses must have earned income to be eligible for the CDCC. (An exception to this requirement exists if one spouse is either a full-time student or physically or mentally incapable of taking care of himself or herself). If your spouse did not work, you cannot claim this credit.

Earned income generally includes wages, salaries, tips, other taxable employee compensation, and net earnings from self-employment. For purposes of the credit for child and dependent care expenses, earned income is considered to include nontaxable employee compensation such as military basic quarters and subsistence allowances and in-kind quarters and subsistence, as well as military pay earned in a combat zone.

Your CDCC is a percentage of your allowable work-related child and dependent care expenses, and this percentage increases as your AGI decreases.

Content in this material is for general information only and not intended to provide specific advice or recommendations for any individual. All performance referenced is historical and is no guarantee of future results. All indices are unmanaged and may not be invested into directly.

The information provided is not intended to be a substitute for specific individualized tax planning or legal advice. We suggest that you consult with a qualified tax or legal professional.

This article was prepared by Broadridge.